Furthering the connections between sound, humor and class is this fairly accedental detail found in J. C. Hotten’s 1860 book,  A Dictionary of Modern Slang, Cant, and Vulgar Words during a discussion of “long and windy slang words:”

Sound contributes to many Slang words – a source that etymologists too frequently overlook. Nothing pleases an ignorant person more than a high-sounding term ‘full of fury.’ How melodious and drum-like are those vulgar coruscations RUMBUMTIOUS, SLANTINGDICULAR, SLENDIFEROUS, RUMBUSTIOUS, and FERRICADOUZER. What a ‘pull’ the sharp-nosed lodging-house keeper thinks she has over her victims if she can but hurl such testimonies of a liberal education at them when they are disbuting her charges and threatening to ABSQUATULATE! In the United States the vulgar-genteel even excel the poor ‘stuck-up’ Cockneys in their formation of a native fashionable tongue. How charming to a refined ear are ABSKIZE, CATAWAMPOUSLY, EXFLUNCTIFY, OBSCUTE, KESLOSH, KESOUSE, KESWOLLOP, and KEWHOLLUX!  Vulgar words representing action and brisk movement often owe their origin to sound. (56-57)

Hotten’s text is remembered for deciphering “Mendicant Hieroglyphics”  – coded chicken-scratch that English vagabonds marked on bricks and signposts to indicate where there were choice homes to loot and whether or not there was any danger. But the curious element here (and in the book elsewhere) is the author’s none-too-shy approach to writing about class distinction and race distinction. I call it accidental because you honestly cannot tell if he takes the civilized/uncivilized distinction utterly for granted as capital-tee-truth, or if he’s observing  just how wordplay and the symbolic universe of language uncovers the false ideology of gentlemen vs. barbarians that reigned high during Victoria.

First he used the term “ignorant” to describe people who construct slang “full of fury.” What does he mean? Does he mean that an uneducated person can see the value in a word that sounds useful despite its being gibberish because he doesn’t understand the difference? Or does he mean that because ignorant people are not educated they therefore have to invent words that sound educated? Both tracts of reason, despite the author’s possible view on class, seem to refute the most racists of beliefs (pointedly those against ‘The Egyptians,’ or Gypsies) by pointing out that invention of language, or seeing a word for what it has yet to become, is far more skillful than the mere usage of pre-existing vocabulary.

Second, there’s this comical scenario involving a “lodging-house keeper” (curiously a woman in the story) who’s so stupefied by fake words that she’s rendered mute, and by mute I mean absquatulated.

Both of these examples detail the possibility that physical sounds, in the form of spoken gibberish, can allow for the breaking open of the critical space needed to perceive exploitative social practices that normally go unspoken – an attractive premise from which to reengage the wordplay in Shakespeare, The Marx Brothers, or Preston Sturges.

Drawing and Spelling in Slapstick

Geroge Herriman and his Krazy Kat are usually discussed without a problem, but so should a lot of other early cartoonist who draw – and spell – in slapstick. Slapstick as a genre is almost always pinned to vaudeville acts and then the films that sprang from that theatrical traditional, but what – I say – What about physical comedy in comics or literary works great, cult, pop or all the the above? Furthermore, how does the use of language in them portrayal of the corporeal? 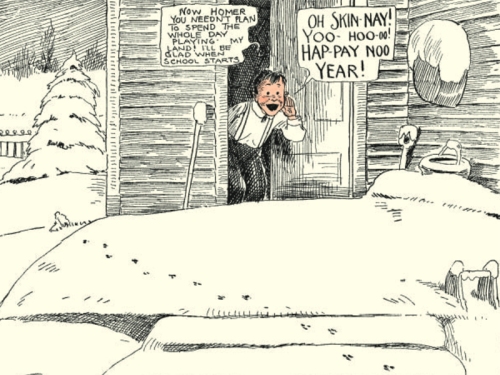 Every drawing in the book accompanies a verse poem by Wilbur D. Nesbit, as does this one, which is this: 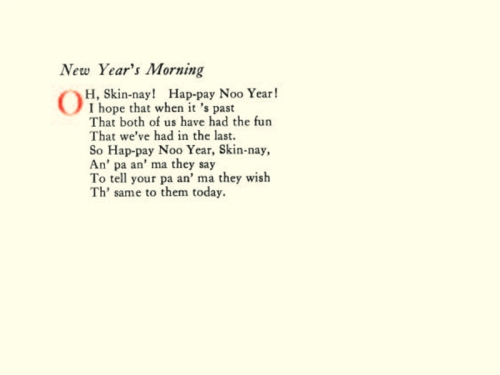 The picture and text, taken from Drawn & Quarterly’s pdf preview of their recent re-release, is quieter than a lot of other prints in the book but has all that’s needed to flesh out its unique narrative qualities.

Even though this is a bucolic scene – wooden house and paw prints – the scene is about two things: 1. the desire to have fun at all times, and 2. wanting to play outside immediately. So this is both a universal and the particular point of view that all children can relate to. Nearly every frame in the the book  – in film theory terms – is the the P.O.V. of Skin-nay character who is rarely shown. All the other kids in his town are always shouting his name, hollering for him to come outside because he’s always preoccupied or not allowed to come out for some often unspecified reason. The point is Skin-nay is not there, which makes his P.O.V. psychological and not realist.

All of these peaceful, pastoral scenes then are either the vision of someone who imagines that this is what’s happening when he hears someone call out his name (though that element too seems to add a level to the fantasy theory). Or this is some wonderful event for all the children of this small, early twentieth century mid-western town, except for Skin-nay, who we must conclude is going (something like) absolutely mad.

These are drawings of fantastic (literally: of a fantasy) fun. Is there a better definition for slapstick?

Consider what the mother says to Homer, the boy shouting for Skin-nay: “You needn’t play the whole day.” No mother says this. Also, and this is the linguistic element, all of the children say things the way that someone their age would spell them. Adults, who can spell, say everything without any dropped ‘g’s or extra syllables marked by hyphens. Look also at the way the animal prints in the image highlight the fact that the snow is fresh, taunting Skin-nay’s unfulfilled wishes and forbidden desires. So it’s no wonder that every frame in the book is fulled with an uncanny quantity of horseplay, tomfoolery, and memorable childhood craziness. It’s utopia, and it’s only utopia because for one person, it’s a prison:

Slapstick is not always about performance, but it is usually about seeing the impossible in the real.

Filed under Comics and Literature

Ever since Fantagraphics began re-releasing Krazy Kat in the early 2000’s, academics have been pondering George Herriman’s linguistic alter universe: a Kafka-esque obsession with “K”s, James Joyce like morphemes, and “sech” carefully crafted attempts to match how he wants the characters to say each colloquial line that they sometimes sit on the page illegible for several moments.

This is a clue to the nature of slapstick and why language is a part of the richness of the genre. George Herriman adapts all the physical tomfoolery and storytelling mania of silent film to the unique medium of the comic strip, but he also forecasts how important slang, puns, and verbal weirdness becomes continue once sync-sound breaks into the theaters.