The language of a failed U.S. Reconstruction after the Civil War is prevalent throughout slapstick. However, most successful comics of the era tell gags that use existing racial stereotypes in such a way that upend the absurdity of the existing social order. In other words, the contradictions are explicitly brought to light, and sometimes with unexpected – even unintentional – poignancy.

For instance, there’s this twist on the Oedipal complex shown between Larry Semon’s escaped prisoner and the pretty, well-to-do black woman on the bench in 1918’s Frauds and Frenzies (she’s uncredited): 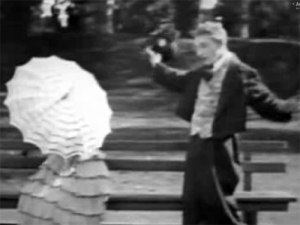 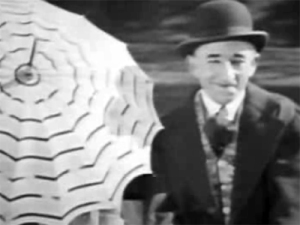 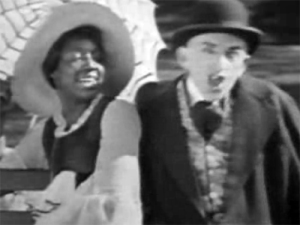 On their face we have in these six frames a social taboo that is being challenged, only by an unwitting and oblivious challenger, who then is so frightened by the prospects of that which he initiated that he hauls ass, literally and figuratively. Herein lies the joke. And slightly underneath this edifice we have the literal “flirting” with taboos, and that adds to the depth of the narrative.

But, if attention is paid to the Oedipal mirroring going on in the scene, something much more subversive can be read in these frames. First we have the initial non sequitur where the sex-hungry convict is not allowed to be attracted to the all-but attractive woman because of her dark complexion. Within this dynamic we have the fact that it’s Larry who is the one escaped from prison, not the woman is free and, more than free, a member of the middle class. In other words, the fact that even though he’s morally deviant, this “man” is white and therefore exempt from anything wrong in comparison to this non-white non-“man.”

On top of this, we have the acknowledgment in frame No. 3 and No. 4 that his desire of her is not surprising, i.e. she all but expects white men to confront her with their “insistence”.

Then in frame No. 5, the most subversive of all, we have the true depiction of the social order, i.e we know who is the true monster on the bench. Larry transforms into a uncontrollable, sex-crazed aberration. He is the ex-con, but more importantly he represents the perverse white order that cannot own up to its own desires, and does not admit even to itself its own routinely practiced behavior. Instead, it would rather run, windmill-style, away from the truth of the scenario.

This running away carries with it another double meaning. On the surface, it’s fleeing from what has been established as untouchable. But the undercurrent is more powerful: the convict runs away because he realizes the very law he accepts as maintaining his social order is, at least at times, undesirable. So the question remains: Does Larry fall because he is too quick to leave or does he trip because his real desire is to stay?

[The entire Semon (with Stan Laurel) film can be viewed here.]