Seek to Hide, Hide to Seek

This post revives an earlier debate about dramatic activity/passivity in slapstick.

Here’re two titans of the silent screen telling jokes with movie-making itself, yet the two gags are achieved through opposing performances. The first is Chaplin in 1914 from Kid Auto Races:

This clip is an abridged version of what drives the whole short: a man can’t help but flirt with the camera. Or is he courting with the audience he anticipates. Or is he in lovestruck with the cameraman? It’s hilarious, and you can extrapolate Chaplin’s entire cinema based on the few clownish emotions and dramatic ideas it presents.

However, here’s the same set-up (public event, large crowd, film-within-a-film) but the comedy comes from a much deeper subversion of our expectations:

This bit from Tramp, Tramp, Tramp (1926), especially when looked at after Chaplin, is spinning with ideas about spectral identity and other Hegelian/psychological head-busters: Can activity (action) operate as passivity (inaction)? More mysteriously, can inaction ever NOT be a type of action (NOTE: the outgoing U.S. Congress, the 112th, earned the moniker “D0-Nothing Congress” but this is of course a misnomer; if the press were more analytical they would have more accurately named it the “Do-Everything-We-Can-Prevent-Action Congress”), as the only achievable passivity is in a thing’s non-existence, which then can’t be discussed in terms like “achievable” so why are we even talking about it?

This is why Langdon’s gag is so phenomenal (NOTE: the joke may or may not have been written by Frank Capra). A movie star playing camera shy running from a camera is first hilarious, secondly thought-provoking, (both of these are apt to describe KAR) but third, it’s twisted, inserting a bit of tragedy into the tomfoolery. There’s an element of the nightmare, of terror, of the uncanny.

In general, what is uncanny can not be entertaining, which is why Chaplin always framed (and in some cases masked) disturbing or uncomfortable subjects like war or poverty or Fascism in moral righteousness and divine/poetic justice, aka: a happy ending (despite his Tramp’s ambiguous future at the end of most of the features).

Langdon however is not a sentimentalist. If anything he’s a surrealist, upending our ideas about story and narrative by withdrawing from reality and, through slapstick logic, guiding us somewhere strange. 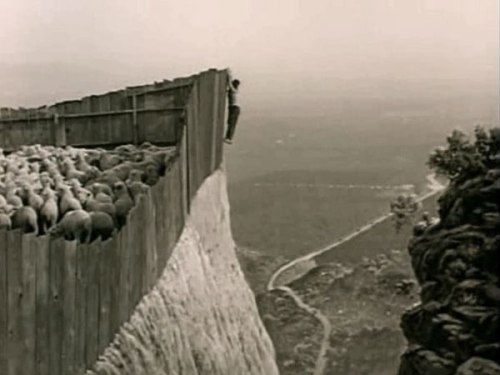